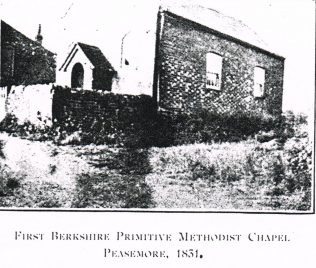 A full article can be found on My Primitive Methodists website

For another insight into the history of Peasemore a huge collection of scrapbooks kept dilligently over decades has been donated to the village.  There is currently a project underway to digitise these fascinating documents before they decay further so they can be read and shared

A tiny sample of one of the books is available in the picture gallery for you to view and we will provide more details over the coming months as we develop this.

The first reference to what became Peasemore Parish was in 951AD in King Edred's Charter when the boundaries of the Parish were defined and described as part of the Chieveley Parish. The village is first recorded in the Domesday book, in 1086, as Praxemere, and again in 1166 as Pesemere, meaning the "pond by which peas grow", from the Old English "pise" peas, and "mere" pond.

At the time Peasemore had no less than three Manor Houses, though one of these moved to the ownership of Beedon upon the marriage of the owner's daughter. The remaining two Manors came into the hands of Henry VIII, who ran them both as one.

In the 13th century two pieces of land were given to the Priory of Poughley, the first to Peasemore House, which was an annexe to the Priory and formerly known as Priorside; the second piece was Priors Wood, which then covered about 100 acres of land. Dutch elm disease has caused the temporary disappearance of Priors Copse, which extended to a mere three acres by this time, but this area has been completely replanted with indigenous trees. At the Dissolution of the Monastries Peasemore House was given to Cardinal Wolsey and when he was impeached it fell to the Abbot of Westminster, who subsequently sold it to a John Carlton. 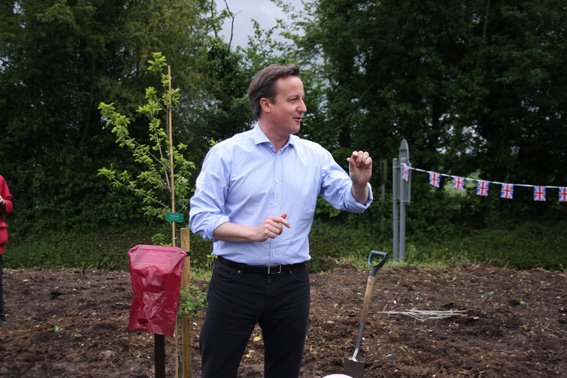 The old church of St. Peada was of Norman construction but was demolished during the 19th century. The tower on the existing church of St. Barnabas was built by Coward and dates back to about 1730, although the rest of the church was built during the last century. It does, however, boast a nice peal of six bells - possibly one of the best in the county

Peasemore is first recorded on a map, drawn by Rocque in 1761, and again on a copy by Willis in 1768. The road network has not much changed since and a circular enclosure, which may be evidence of an Iron Age settlement (an archeological research project headed by BARG is currently underway) is clearly visible on successive maps.

Fire broke out on 27 July 1736 at Drakes Farm destroying the whole of the centre of the village, the church barns and rectory and also the woollen mills which served the Jack O'Newbury 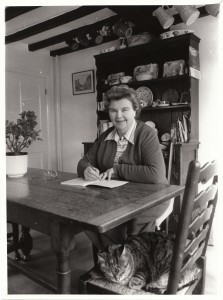 A Neolithic stone axe head was discovered at Prince's farm in the 1950's [now at The Ashmolean Museum, Oxford] and a number of flint tools have been found at Warren Down. These have been authenticated by Newbury museum and suggest that the area has been occupied for at least five thousand years.

Peasemore had two shops and a post office (in Hailey Lane) in the nineteenth century. The post office closed around 1980. Peasemore also had a school, built in 1850, replacing an earlier school in what is now called Drakes Cottage. The village primary school closed in the 1950's.

Noteworthy residents have included prime minister David Cameron as a child, and the novelist Dora Saint (aka ‘Miss Read’) who was headmistress of the school for a short while (pictured). The Peasemore Manor house was also owned by Thomas Chaucher son of the famous Poet

In this section are a number of transcripts of talks done by Walter Brown in the last 1990's which provide a wonderfully interesting insight into Peasemores more recent anecodotal and experience based history but also details of the historic basis of the village and its surroundings.  They make a fascinating read and have now been re-scanned and formatted so that hopefully they'll be available to anyone searching on the internet for information.

If you want to read about cricket matters, haunted burial mounds and why a Dumbledore isn't really a white bearded magician from hogwarts then read on!

Peasemore's Norman church, dedicated to St Peada according to ancient Peasemore tradition, was built in approximately 1090. The Church and churchyard were consecrated by the great Bishop Osmund, 8ishop of Salisbury. Although St Peada was never officially canonised as a Saint. much as he deserved to be, Bishop Osmund was; so we have the unusual distinction here of having had our Church and churchyard consecrated by a Saint

The old Norman Church having stood here for some 800 years was demolished in the last century to be replaced by our present Victorian Church. This Church, designed by G.E. Street. who was considered one of the best church architects of his day, is an extremely fine building; but the loss of so much of our old church is much regretted.

At the time of this rebuilding, most of the old Norman Church was thrown out as rubble and used to make up the village street The Rector of Brigbtwalton, who was passing through at the time, noticed our old stone cross lying by the roadside and wisely picked it up and took it home with him to Brightwalton Rectory. There it lay for some 60 years until Brigbtwalton put up their War Memorial at the end of the Pirst World War. The square base of the memorial consists of all that remains of Brigbtwalton' s own ancient Village Cross and on the top of the shaft stands our old Peasemore cross.

SOME EARLY HISTORY OF PEASEMORE

Peasemore has an ancient history. We have some old archaeological sites around us here which go back for some four thousand years. Very little has been recorded about them and so I will tell you what we do know. But four thousand years is quite a long time and you must allow a bit of mythology to creep in here and there.

There was an interesting period in our Peasemore history back in the middle ages when for a time the whole of our Parish became crown property owned by the King. We have not recorded much of that period so far, but over the years Stephen and Dorothy, Donald Lindsay and I have researched some of our old Peasemore history. Between us we examined a large number of old parish deeds, Manor Court proceedings, wills and other documents, which have given us a good deal of information about Peasemore through the ages; though undoubtedly there is a great deal still to be discovered.

Peasemore has a very old tradition that our early church here was dedicated to St Peada. It was thanks to Peada that Christianity came from Northumbria down to Mercia in the middle of the 7th century, and then very shortly after Peada's untimely death it came to this part of Berkshire with the Mercians, under Peada's brother
Wulfere. Christianity coming from Northumbria at that time came here in the Celtic form.

Pic of the moment 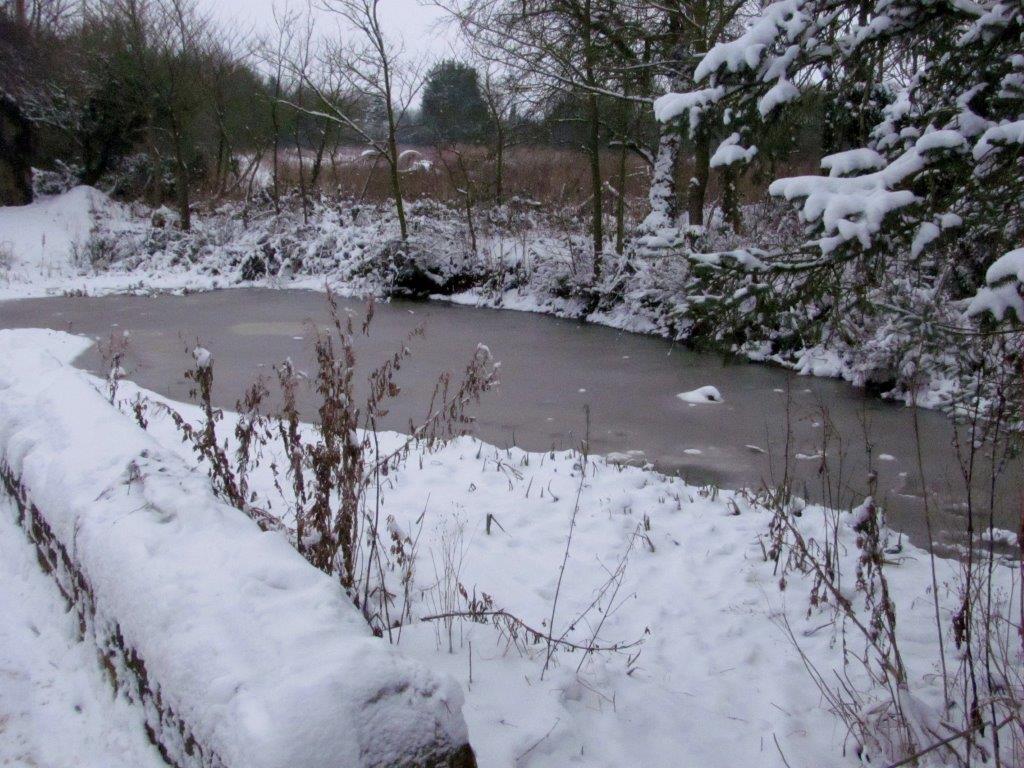